Early in the week we saw continued growth in U.S. stocks even amidst news reports from the prior weekend that started getting louder regarding political turmoil.  The biggest story for the week was Wednesday with a pull back like we haven’t seen in a while.  This did create a buying opportunity that we have been looking for, and were able to take advantage of.  Let’s look at the reasons why it looked like an opportunity at the time and the confirmation we’ve seen follow.

Market Volatility (as measured by the VIX index) has been relatively low since the election in November 2016.  You can see this in the following chart which shows volatility in the market over the past year.  Then we experienced Wednesday’s spike up in volatility.  Now let’s talk about why, on Wednesday, it didn’t feel like it would be a prolonged market pullback. 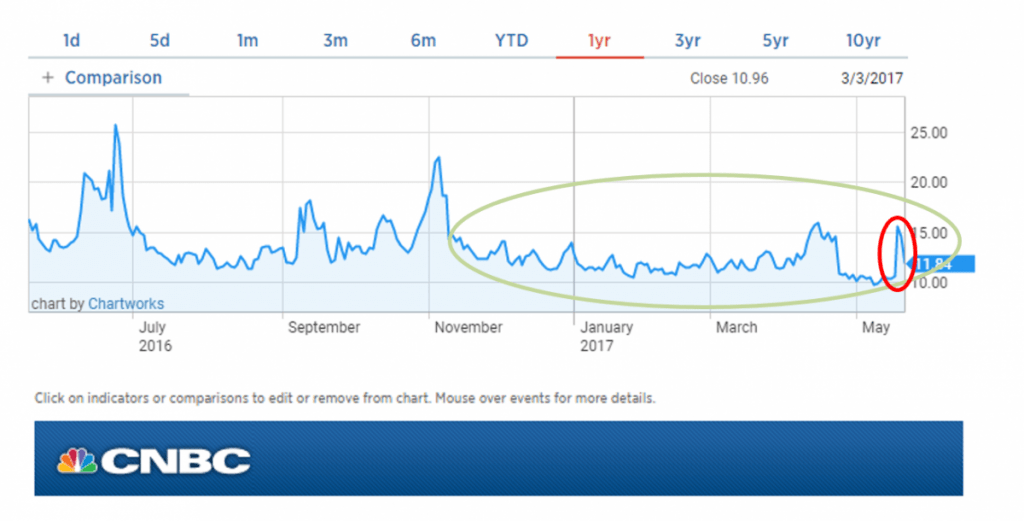 There have not been major changes in economic conditions.  We did get housing start numbers early in the week that were a bit lower than we would like to see, but overall it doesn’t give us a reason to be concerned.  We are still seeing great earnings out of companies that continue to give us a reason to believe their businesses have a solid base for progress forward.  Jobless claims were reported lower than expected at 232,000 vs. an estimate of 240,000.  These items still provide us with confidence in the economy’s current state.

Here is a quote I wanted to share that may shed some light on where we are in this bull market:

Listening to a variety of analysts on Wednesday, there was definitely not a sense of total optimism or euphoria.  We could safely say there is a mix of skepticism and optimism.  So this leads us to think there should still be room to run in this bull market.

When we are considering where to invest or whether to stay invested it’s important to look ahead and see what is possible. Wednesday we heard people talking about impeachment of the President and this seemed to be the news that brought the market down.

I want us to really think of what would happen if this did actually come to pass.  First a Republican majority Senate and House would have to vote for the impeachment, which seems highly unlikely.  And also we would have Vice President Mike Pence fill the Presidential position.

So do we still have the same beliefs about today’s market under a Mike Pence Presidency?  I would note that many voted for this Presidential and Vice Presidential ticket, as a pair, not just Donald Trump for President.  We still believe that the same legislative agenda items would remain in place and would be a priority.  The agenda items of tax reform, infrastructure, and healthcare reform among other items are really part of a Republican agenda, which we believe could still be carried out.  And we still believe that companies would continue to do well in that environment.

When investing, it’s important to not only look at the happenings of today but to think about the future too.  Stay diversified for the long term so your portfolio can withstand market fluctuations that will happen. We do believe there will be continued volatility ahead as questions of reform getting done linger, but we don’t see that as cause to get out of the market.  Interesting even is that if tax reform doesn’t get done until early 2018, it could be retroactive to 2017, which gives businesses reason to continue investing today.

We have seen confirmation that Wednesday’s pullback was likely due to the President’s political turmoil as Thursday and Friday the market has continued to move higher.  However, we are also aware that geopolitical risks still remain in sight.  Also, these distractions of political turmoil do not help to increase the speed of progress we want to see in legislative reform.

So, in summary, when we talk about buying opportunities like Wednesday we don’t mean to sell your entire portfolio and buy a new list of holdings.  We mean this is a good chance to invest that extra cash savings that you’ve added in your account over the past few months.  It is also a good chance to rebalance, by increasing your allocation to areas you want more or less investment in.

These decisions are not made as a quick trade or short-term holding.  Even in the quick one-day buying opportunity this week, the decisions of what you buy and sell should be part of your longer term strategy toward reaching your goals.