The past couple of weeks we have seen volatility return to the market. In the wake of this volatility we start to question the strength of what the market is standing on. In fact we see that 2018-2019 has a solid ground in the market projections!

This past week was the annual Charles Schwab conference where speakers from all walks of life, not just finance, brought their insight to the state of our world and economy.

Let’s review the reasons we believe this market isn’t weak and can still improve. We will also highlight thoughts from the speakers we were fortunate to hear.

Let’s start in the U.S., where we see multiple reasons to stay invested.

Overseas we are seeing the highest number of major economies accelerating in growth than ever before. For example, every month this year there has been positive global performance. This has never happened before. And 2018 is expected to see similar performance.

From Greg Valliere of Horizon Investments, we heard of high potential for tax reform getting done. According to Valliere, it seems tax cuts may not be effective until 2019. He also noted that there doesn’t seem to be any willingness to deal with the hard topics like spending, Medicare, and social security, which affect individuals retirement. 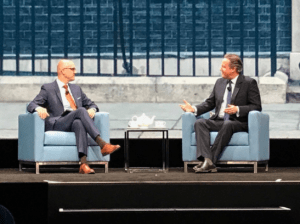 For a big picture view we heard from David Cameron, Former Prime Minister of the United Kingdom.  He offered thoughts regarding many people being left behind for too long.  People are tired of politics that don’t work.  And he offered ways that we can do better.  But, he shared that we do have political systems that people aspire to around the world.  That freedom delivers the innovation and creativity needed to move forward.  We need to be more like us, not like someone else.  He noted that spending time on social media means we spend a lot of time with other people who agree with our opinion.  We aren’t learning to talk to others of differing opinions to discuss and learn from each other.

His thoughts and experience shared were very inspirational to move forward doing the best we can.  Even from his point of view, after being Prime Minister, he was optimistic and passionate that change can be made.

So what does this mean for our portfolios?

There was an overwhelming consensus from these experts that this bull market should last through 2018.  Everyone seemed to agree that any signs of a market pullback don’t seem likely until 2019.