During the months of August and September, we’ve seen continued positive performance in the financial markets.  With this higher performance has come an increase in volatility attributed to a variety of reasons which we will dig into.

The following chart is extremely helpful for comparing volatility and putting it into perspective.  As you can see over the past twenty years, the largest spike in volatility came in the late 2008-2009 period.  So, in comparison, the volatility we are seeing today is nothing like what we saw then. 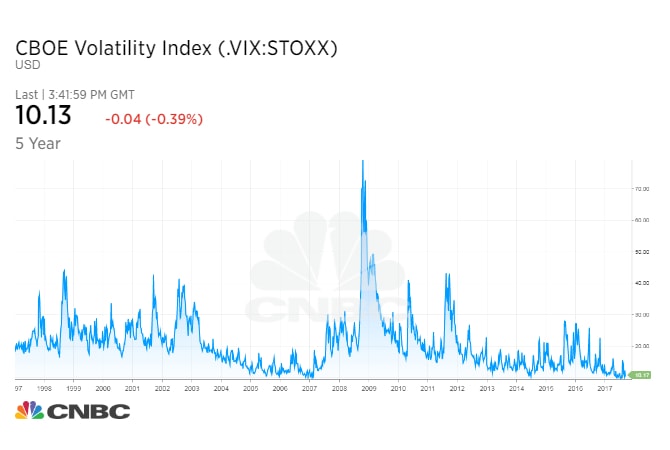 Let’s dig into the reasons why we are seeing increased volatility now:

Recent success has been a positive showing Congress can actually pass legislation, when it wants to.  A deal passed by both parties that included hurricane relief, an increase of the debt ceiling, and an extension of the budget deadline has renewed hope in the legislative process.  This got done pretty quickly after Congress returned from their break.

Just in the past weeks, there has been a sharp rise in potential for tax reform.  A week ago, we couldn’t say with much optimism that tax reform could get done this year.  However, with Trump ignoring party lines, it seems a bit more likely that it could still happen.  Lowering rates and providing a way for companies to bring funds back to the US with a lower tax would put cash to work in the US economy.

The Federal Reserve has been working toward normalizing interest rates.  They need to raise rates back to normal levels, which ultimately points to a healthy sign that the economy is recovering.  As they meet this week many are watching to see if they delay another rate hike due to concerns about unemployment or inflation.

The Fed is trying to balance the increase of interest rates with the unloading of its balance sheet, which purchased bonds to prop up the economy over the past several years.  However, with a healthier economy today these two items need to happen.  The questions become: when is the right time and how fast is too fast?  The market is looking for these two things to be done in balance and at just the right time to not hurt the economy.

And in the not-too-distant future a new Fed chair could be appointed other than Janet Yellen.  But this is still to be decided.  However, it is important to note as it could change the course that the Fed is on.

We have all seen the devastation brought by the hurricanes Harvey, Irma, Juan and now Maria.  We all likely know someone who has been affected by these storms.  The cost to rebuild and find a new normal will indeed take many years.  Yet, the construction and rebuilding needed in these areas will help to bring some economic growth as well.

Another risk that does remain is the threat of action by North Korea.  This seems to be a risk that will not be going away quickly.  When it flares it does drive the market a bit lower.  But thus far with other positive reasons the market has rebounded each time.  We will see in time how any action toward progress will be made.

The largest positive right now is the potential for progress on legislation for tax reform.  The biggest negative seems to be the unknown of Geo Political risks.  With all these volatility drivers it is important to remain diversified with a long-term portfolio.