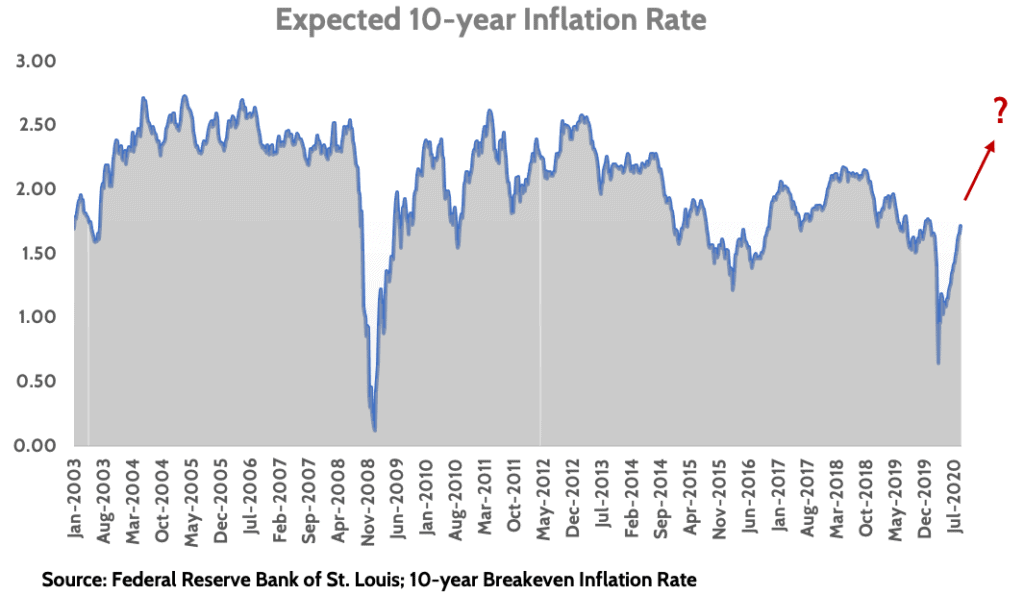 In our March 2020 Newsletter – “Reassessing the Investment Landscape” – we looked at what future investment returns could look like in a low interest rate environment. The 10-year U.S. government bond yield had just declined to an all-time low of 0.60% and the Federal Reserve cut short-term interest rates to 0% in response to COVID. Low interest rates have persisted since then, and the Federal Reserve has made it clear that short-term rates will stay near 0% for an extended number of years.

There have been two additional developments that we believe warrant discussion. In our view, these events mark a shift in how investors should think about the environment they’re used to investing in. The first is the increasing acceptance of what’s called Modern Monetary Theory (MMT). The second is the new approach the Federal Reserve is taking to targeting inflation.

I promise not to get bogged down in the complexities of these changes. We’ll go over the basics of these policy shifts so you know what’s going on. But the goal with this month’s newsletter is that clients understand what these shifts mean for their investments. So sit tight.

For as long as any of us has been alive, we’ve heard endless political debates about Federal budget deficits. The basic argument is that if the government spends too much, future generations will be saddled with having to repay that debt, which will hurt them. “You have to live within your means, or else!”

A new generation of academics isn’t so sure. They argue that there’s no limit to how much the government can spend as long as there’s a dependable buyer of newly issued government debt. They call this philosophy Modern Monetary Theory, or MMT for short.

How would MMT work? The government would ramp up spending. To fund this spending, they’d have to issue lots of new government debt. Because there’s a finite amount of debt that private investors can absorb, the Federal Reserve would act as buyer of last resort and buy whatever they needed to buy to keep interest rates low. There’s an economic term for when a central bank (i.e. the Fed) buys government debt: it’s called “debt monetization.”

What’s clear in this chart is that the end result is the same: the Fed buys the debt that’s issued by the U.S. government. But they can’t buy directly! No, no, no…Congress prohibits that to prevent a wayward Administration from spending the country into oblivion. So big Wall Street banks buy new debt from the government and then flip it over to the Fed, earning a nice fee, of course.

Proponents of Modern Monetary Theory believe it’s okay for the Fed to do this. And if the Fed can do this, then there’s no longer any limit as to how much the government can spend. You can have your cake (unlimited spending) and eat it too (no consequence to issuing too much debt).

If this sounds too good to be true, it is (in my opinion). MMT seeks to turn thousands of years of human history on its head. If financing unlimited government spending is as easy as having one arm of the government buying debt issued by another arm, are we to believe it’s taken until the Year 2020 for politicians to figure this out?

In fact, governments old and new have tried this strategy before and the end result is always the same: inflation. The Germans tried it after World War I and it ended in hyperinflation in the Weimar Republic. Venezuela is doing it today and they too are experiencing high inflation.

After the terrible inflationary experience of the 1970’s in the U.S., Federal Reserve Chairman Paul Volcker vowed in 1979 to crush inflation once and for all. To do so, he raised interest rates to 20%. This caused two recessions in the early 80’s, but was ultimately successful in bringing down inflation.

Inflation eventually fell to around 2% in the 1990’s and has stayed around that level ever since. Economists called this period the “Great Moderation” where the economy has been able to grow without causing inflation to rear its ugly head.

Unfortunately, successive financial crises in the early 2000’s and 2008-2009 caused the level of inflation to fall even further. The Federal Reserve began to panic. They worried that a Depression-era spell of deflation (falling prices) would ravage America.

To combat the potential risk of Depression-style deflation, the Fed changed course and decided that some level of inflation was good for the economy. They picked an inflation number out of a hat, stating that they’d keep monetary policy loose until inflation got back up to 2% per year. 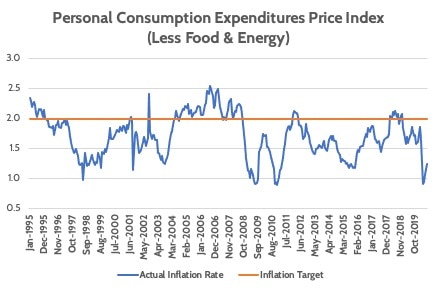 Turns out, they haven’t been very good at achieving this target. Other than a brief period during the mid-2000’s housing bubble, inflation has consistently fallen short of its target.

You might think that they’d be smart enough to ask themselves whether 2.0% inflation is the right target. Why not 1.5%? If I wanted to get down to 100 pounds (currently well north of this level!) I can certainly try getting there but I’d likely starve myself and cause other health issues in the process. Yet this is exactly what the Fed is doing by blindly sticking to this 2.0% number.

Having failed to achieve 2.0% inflation, current Fed Chairman Jerome Powell gave a speech at the end of August which laid out a new strategy: the Fed will now target an average of 2% inflation over time. Instead of getting back to 2.0% inflation, they want inflation to average 2.0% over some undefined period of time.

Why does this small shift in wording make a big difference? We all know how averages work: they’re a product of some numbers below the average and some numbers above the average.

Previously, the Fed indicated that it would start to raise interest rates when inflation got to 2.0%. But now they’re saying they’ll tolerate inflation getting above 2.0%. Put another way, they’ll keep monetary policy very loose (i.e. 0% interest rates) until they get inflation above 2.0% consistently.

And they’ll do whatever they can to see that happen. The 0% interest you see on your savings is likely to be with us for the next 5-10 years.

Investing in an Inflationary World

Whether the Fed’s new policy or MMT actually results in future inflation is hotly debated in policy circles. But in our view, there’s been a seismic shift in mindset within the policy intelligentsia in our country this year that all points in the same direction: inflation.

Given that we haven’t experienced an inflationary investment environment in 40+ years, it’s worth taking time to think about how investors can manage around this risk. What I’m going to outline below are my early thoughts about how we may shift client investments to accommodate this new environment.

Higher inflation almost always results in higher interest rates. Given that the Fed and MMT proponents are hell-bent on generating higher inflation, there’s reason to believe that interest rates may move higher at some point. To combat this potential risk in client portfolios, we may look to shorten the duration of bond holdings.

Second, a shift to Treasury Inflation-Protected Securities (TIPS) may be advantageous. TIPS help protect the “real” value of the bond by increasing its principal by inflation each year.

For example, if you buy a TIPS bond for $100 and inflation is 2% over the next two years, you’d get paid $104.04 when the bond matures in Year 2. With normal bonds, you’d just get your initial $100 investment back plus interest.

There’s a trade-off, however. The cost to get inflation protection is that you don’t get much interest income along the way. So current income suffers but at least you’re protected if the government loses control of inflation, 70’s-style.

Third, keeping a well-diversified portfolio of stocks. From a ‘duration’ perspective, stocks are very long-duration investments. There’s no “maturity date” on a stock. Growth stocks that trade at expensive valuations are even more “long duration” as they tend to pay little in dividends.

In our August Newsletter, we talked about the Nifty Fifty Era of the early 70’s and how those growth stocks experienced very poor returns starting in 1973. It’s no coincidence that their poor performance coincided with the ramp-up of inflation during the 1970’s.

Today’s stock market is increasingly dominated by very large, expensive, growth stocks. Names like Apple, Amazon, Netflix, and Facebook are great companies. But their stocks have soared so high that we believe they’re susceptible to poor performance if inflation starts to take hold.

To combat this, maintaining a well-diversified stock portfolio is critical. We pay close attention to your stock holdings to make sure you’re not overly exposed to any one type of stock. As certain asset classes – such as large cap stocks – become dominated by fewer and fewer growth companies, it may be prudent to find other funds that give access to large cap stocks without being dominated by these names.

Finally, there’s Gold. In our weekly market update from July 30, 2020 we described Gold as “an odd fellow.” It doesn’t generate any income, and its value is entirely dependent on what investors think it should be worth. There’s no earnings to “value” it on.

Yet we’ve included an allocation to Gold in client portfolios over the last year as a small hedge against the Fed’s current monetary policies. You don’t have to read too many of our weekly updates or newsletters to know that I take a dim view of what the Federal Reserve is doing.

Our concern has been and continues to be that the Fed is undertaking policies that will lead to inflation. Gold has traditionally provided protection against higher inflation. Don’t be surprised to see Gold and other precious metals remaining in your portfolios for the foreseeable future.

The purpose of this month’s newsletter is to give you an idea of our thinking on the evolving investment landscape and how that may impact the investments we include in your portfolios. Any changes won’t happen at once. Shifting from a low-inflation investment regime to a potentially higher-inflation environment is monumental shift, and we want to be very careful and pragmatic with how we express these views in client portfolios.

Nor should you expect any shift to be dramatic. It would be wholly irresponsible to put all your money in Gold and TIPS, for example. There’s always a risk that the views I outlined above turn out to be completely wrong. Hubris is dangerous when it comes to investing!

Yet these developments since the COVID crisis started increase our conviction that there’s an important shift underway. We’re becoming more convinced that the combined impact of MMT plus the new Fed mandate gaining wider acceptance in DC policy circles will ultimately be inflationary. With that, a ‘tilting’ of portfolios in the direction of these inflation-friendlier asset classes is making more sense.